Family and friends are obviously curious to know how we feed Jason, what we feed him, how his tube works, how it stays in his tummy etc. So I thought it would help to have a page explaining and showing exactly how we feed Jason.

Jason's mic-key in his tummy

This is what the mic-key tube looks like in his tummy. The tube is made of silicone. It has a valve that opens at the top that we feed him through and on the one end a port which is used to inflate and deflate the balloon. The balloon is inflated with 5mls of water and this balloon keeps the tube in his tummy. We can take his tube in and out for cleaning if needed but it is best to leave it alone.

Feeding Jason solids, you will see a tube is added with a 60ml syringe on the end. Solids are a lot thicker therefore a thicker tube is used and the food is pushed with the plunger of the syringe. If the solids are thin enough you would just hold the tube upright and gravity would allow the food or formula to go into his tummy. A thinner tube is used for liquids.

What we feed Jason now

Jason gets fed solids and liquids with a syringe orally during the day. The reason why we use a syringe is we have not managed to persuade Jason to eat enough with a spoon. Having been tube fed for years I guess he is not use to eating so would have to learn the art of eating just like any normal baby would. The solids we feed him are stews, soups, vegetables, potato, chicken and fruit as well as special formulas for tube fed kids. It is obviously very important to make sure Jason's dietary requirements are correct according to his weight and his height and in order to do this we have been seeing a dietitian to calculate the correct quantities for him. The solids are blended very thinly, basically to water and are fed to him with a syringe orally. At this stage he will not eat lumps.

Night feeding via the pump 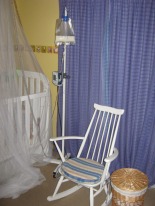 Jason currently has 500mls of Nutrini Peptisorb overnight with his feeding pump while he sleeps. His daily intake is not enough to sustain him as the calories are not enough at this stage. Unfortunately until we are in a position where Jason is eating enough we will have to continue with night tube feeds. As a mom I don't sleep very well knowing Jason is attached to a tube. With movement during his sleep we have had two incidents where the feeding tube (mic-key) has come out from the force of being pulled attached to the pump. Once the tube comes out of the tummy you have about 20 minutes to get the tube back in otherwise the hole in the tummy closes and then you have problems. Also the extension tubes are long and with turning they have been wrapped around his neck and stomach before. So sleep isn't something I get to do. 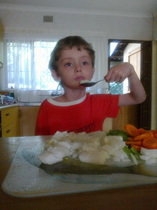 We encourage Jason to eat all the time. There is always food available to him and we do offer him as well as leave food available. The only two things that he will ask for is water (which he drinks with his sippy cup) and raw onions. Don't ask me why but onions is the ONLY food he will eat on his own. He LOVES onion and has onion on a daily basis. Believe me we have tried other foods, tried putting foods with the onion but no he will only have the onion!!
Powered by