Jason was born on the 8th June 2007 at 31 weeks weighing 1kg. After his birth he went straight to the Neonatal ICU with his paediatrician. The most amazing thing for us was that as small as he was, he did not need to be ventilated, he was under a head box for about half an hour and that was it. I only managed to see him that afternoon when they wheeled my whole bed through to the NICU ward. My first thought was goodness he is tiny. He was attached to all sorts of monitors that were stuck on his tiny little body. It was very overwhelming being parents for the first time and seeing your TINY son laying there with all these tubes and wires everywhere on his little body and all these alarms going off. Eventually you get use to all the noise and alarms going off and know exactly what wire is for what purpose.

NICU was a real bumpy road for us. We had plenty of good days but plenty of bad days as well. We thought the birth would be the hardest part but that was only the beginning of all our struggles. On day 3 we were told by Jason's paediatrician that Jason was not well and his platelet levels had dropped to 15 which was critical. We were obviously shattered but it was in Jason and the paed’s hands and all we could do was watch and wait. Jason was given medicine to increase his platelet levels. He dropped weight to 980 grams. His platelet levels increased very slowly to 19, 28, 25, 40, 68, 117, 30 and then from then on they just climbed back into the normal ranges. Jason also battled with Jaundice like most prem babies, was on and off the lights constantly. One day we could see our baby's little eyes then the next day he was under the lights again.

We also battled with his haemoglobin levels  dropping all the time and getting VERY low. He had to have 2 blood transfusions. Feeding wise and weight wise, things just went so slowly. Weigh day was twice weekly and we couldn't wait to get to the hospital to find out the weight. Every gram counted for us and I normally phoned before I got there. It was heart  breaking to see how almost every second day they had to take blood in order to check his platelet levels, his haemoglobin levels, his CRP levels for infections etc. BUT slowly but surely our little boy started to get better and better. We watched parents coming in with their prem babies and leaving before us. Some were even just above Jason’s birth weight but they just managed to feed nicely and leave so soon. Jason battled to feed and gain weight. It was so funny how we got so excited to feed him and feeding consisted of holding the syringe with the NG (naso gastric) tube attached and his breast milk goes down his nose into his tummy. But I was there for every feed, every three hours. We only started feeding on day 3 and that started at 3mls every 3 hours. When he got sick, that was a setback, the milk was decreased and weight gain was slower. Jason battled to latch and had difficulty with his sucking reflex. We clearly remember the NICU nurses walking and talking to Jason while they tried to get him to bottle feed. He took forever to drink small volumes.

A few days before it was time to be discharged, a groin hernia developed and we had to have an operation to fix
that. Because we had left the NICU ward we had to go into the isolation ward.

Our journey back to hospital started almost immediately, we were back 4 days later for an operation on a groin hernia on the other side. Jason was also constantly getting bronchitis and pneumonia. We had to get admitted for ng (naso gastric) feeding for weight gain. Jason was eventually diagnosed with severe reflux in November 2007. As Jason was only 2.9kgs then we decided against having the operation due to the risks involved and chose to rather try helping his reflux by changing his formula and medication. His reflux just got worse and he would not drink and eat enough. He was basically just having enough to survive. We had many sleepless nights trying to get him to drink his bottles and had to resort to syringing milk into his mouth at stages. We went home with an NG (nasal gastric) tube as well. His reflux worsened in July 2008 and his eating worsened. We saw the pediatric surgeon again and decided to have the operation. We were told that he was malnourished and at the time of the operation he was 15 months and 5.3kgs. We didn't realize the extent of his silent reflux but the pediatric surgeon informed us that Jason's esophagus was rawly burnt from the acid reflux. Because Jason has such a high pain threshold, he didn't complain or scream like a normal child would.

During the first attempt to have his tonsils and adenoids out and grommets in, which was in October 2009, they had complications with his oxygen levels dropping drastically. They had to abandon the operation and we ended up in ICU for the night to monitor his vitals. Doctors did bloods and chest x-ray. He had a little fluid on the lungs but didn’t seem to be something that would cause such a drastic drop like that. In November 2009 we went in again for the op but a day earlier to be monitored, saw the cardiologist, heart was perfectly fine, did bloods, all clear, took chest x-ray, all clear. During the op the next  day, same thing happened, oxygen levels dropped again but they managed to make a plan with the ng tube and inserted another hole so the oxygen got to the left lung. We ended up in hospital for 7 days because of complications with Jason gagging non-stop. They did two chest CT scans, a brain CT and a brain MRI to try and determine why he was gagging so much. The brain CT and brain MRI picked up an area of demyelination.

We are not sure if the demyelination is the reason for his developmental delays with speech and understanding. He does not talk properly yet. Understanding is very limited but he tries and we have noticed huge changes. He goes to speech therapy and occupational therapy twice a week. Unfortunately we have not been able to diagnose Jason yet but both his paediatrician and neurologist feel that Jason has an autonomic problem. We have done some metabolic tests and await results of chromosome tests which was meant to be done in May 2011. The blood was taken but the test has never been performed due to being "under staffed".This is South Africa for you! The other option would be to send the blood overseas for a fast result but this is not an option as the cost to do this is in the region of R15,000.00 so I guess we have to wait!

Jason is under the care of a fantastic team, his pediatrician "Dr. P", a neurologist, a dietitian, a speech therapist and an occupational therapist. 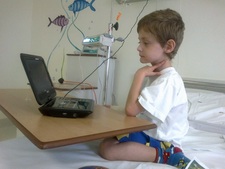 Jason has a feeding tube in his stomach. He is still tube dependent but will now eat orally with a syringe during the day. At night he is on a feeding pump that feeds him while he sleeps due to not enough calories.

He will not eat or snack anything on his own besides raw onion. Yes onion!

Talking is very delayed. Most of the time we don't understand what he is saying. He says a few words but tends to copy what we are saying rather than being able to think for himself. He goes to speech therapy and occupational therapy for this.

Jason is immunodeficient and therefore catches EVERYTHING going around. He has to go to hospital every 3 weeks for polygam infusion where he is attached to a drip for the day (minimum of 8 hours spent on the drip).

He has chronic diarrhoea daily and we therefore haven't been able to successfully potty train due to this. He has a chronic post nasal drip which he is on medication for. When he is sick he suffers from gagging and vomiting which usually ends up with him vomiting so much that he is eventually vomiting bile and has to get admitted for dehydration.

Weight gain is very slow due to the chronic diarrhoea and infections he gets.

He has a VERY high pain threshold. He can hurt himself badly, fall over, cut himself, hit his head etc. and he will just get up without a problem taking no notice that he hurt himself.

He has never had tears since birth!
Powered by